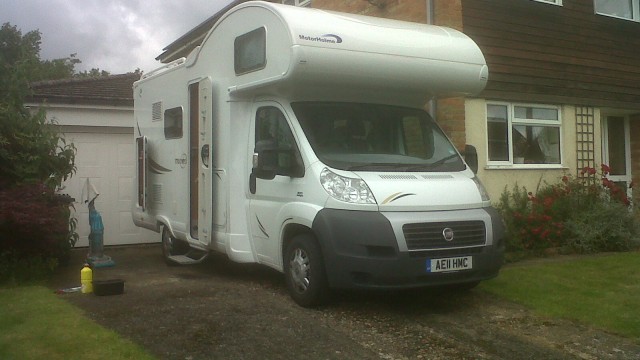 To finish off day 14 we set off from Johns at about 8 am after a nice cuppa and toast in his kitchen rather than the van, pure luxury.  Dave offered to take the first stint driving which seemed like a good idea as he had driven much larger vehicles before and his company insurance would cover him! The plan was 2 hrs each so we could really crack on and get home.  The route was a little more complicated than straight back to my place as Paul was going climbing in Wales over the weekend and obviously Dave wanted to go to his home rather than mine.  So drop Paul in Crewe and Dave at Upper Minty then through to Farnham.

True to form the weather was absolutely terrible with very high winds and plenty of proper rain.  David bravely hung onto the steering wheel and took us 3 hours closer to home.  A stop for Coffee and lunch at services was taken, the food on offer was so bad even Paul decided not to eat there…… we just grabbed coffee and made cheese and onion sandwiches back in the van.

I could avoid it no longer as it was my turn to drive.  The only words of caution were “it’s easy to drive but remember it is quite long”.  Off we went with the weather getting worse as we travelled towards the lakes and Yorkshire.  If anyone has seen the news from that day they will know that there was widespread flooding in that region last Friday and I completely understand why.

Arriving at the dreaded M6 junction 21 we were informed by what must be permanently lit signs telling us there were delays between junctions 21 and 17.  Having done this bit of the M6 a few times I had gloomily been predicting this and sadly I was proved right.  The Satnav that had predicted arrival at Crewe at about 14:30 finally gave in when we got there at 16:00 ish.  Being unfamiliar with Crewe station I promptly drove the van under the taxi rank near the entrance… fortunately remembering the length of the van as there were some very unfriendly looking bollards at the entrance.  This very narrow lane was never designed for a row of taxis and us so to be honest I was a little stuck.  A police car was parked at the end of the queue and by now I had realised we should not be here and waited for the helpful police to come and see what we were doing.  Not a chance of me reversing out so I sat there until the first taxi left then we pulled in the mirrors breathed in and made our way very slowly past the queue and by a miracle managed to not hit the Police car as we crawled past.

Paul had jumped out and gone to get a pint while he waited for his train; thankfully he is such a considerate chap he had taken all of OUR Snickers bars to ensure we did not regain any of the weight we had managed to shed in the previous 2 weeks.

On our way again we were guided back to the M6 by the trusty Satnav and just kept going until we arrived at Dave’s.    By now it was about 19:00 and the sun was shining and it had turned into a very pleasant evening.

Quickly unloading Dave’s stuff we “used the facilities” and Rob and I continued to my house.

Arriving at 21:00 we parked up, called for a taxi and went out for curry… the same Nepalese restaurant where we had started our adventure 2 weeks earlier.

Fed and watered it was time for bed so home we went.

Next morning early we were up emptying the van and Rob was packing for the train home.  At this point he realised he had brought a little too much kit 1 large bag and 1 enormous bag, it had been easier for him on the way out as he had me to help him!

I dropped Rob at the station and went back to sort out my stuff which was now all over the kitchen!  Rest of the day was dull, vacuming out van, emptying the toilet (yes I knew I would have to do it) washing everything and getting the van ready for collection on Sunday.

Very dull end to my account but sadly it was.