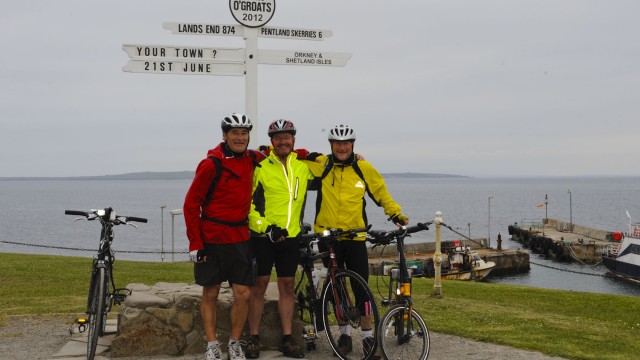 Just for a change we spent some of the evening of the previous day in the local, in this case the Belgrave Arms where Wendy and Craig very kindly allowed us to use their car park for our overnight stay.  Billy arrived with lunch for tomorrow which was 4 freshly caught and cooked Lobsters…  by now we were really roughing it!

A couple of the locals who had had a “few beers” kept laughing at us and telling us about the fearful Berriedale braes.  This is a very steep climb about 10 miles north of Helmsdale at one point it is a 180 degree bend with a climb of 13 %. The climb out of Helmsdale was derided as “no bother compared to the Braes”.  We were also repeatedly told that the first 10 miles was the worst!  Billy who is a local fisherman cheerily told us he would not be taking his boat out tomorrow as the weather was going to be too bad, strong Northerly winds and rain…  more laughing about the misery awaiting the people from England.

As usual we woke early and thankfully we had been loaned a key to the hotel so we could use their facilities, this made the “atmosphere” in the van much more pleasant while we had breakfast.

With the words of encouragement from last night ringing in our ears we locked the van and gave the keys to Wendy.  Rob had decided that he needed a proper bed so had booked himself into the Belgrave for the night so as we left I could almost hear his snoring from his comfortable bed.

Switching on the satnav I could not receive a signal so set off on the climb out of town, quite a few miles uphill and steep at times.  By the time we got to the top the satnav burst into life and I think the lack of signal was Gods way of not letting me see the contours of the climb therefore not knowing how long and steep it would be.

Dave was not in a very touristy mood so he just waited at the road for us.

8 miles in we were sailing down towards Berriedale and from this side the descent is fearsome but I just half closed my eyes and hung on trying not to think of what would happen if I had a front wheel puncture.  When we hit the bottom we were breaking to make the bridge which thankfully we all did.  We were met at start of the climb with a sign informing us it was 13%, we couldn’t even see the top as it as some way off and round a corner or two.  We all made it to the top without stopping with my heart rate peaking at 85% of max, quite a lot lower than it would have been when we set off less than two weeks ago.  We had the now very familiar RAF fly past as we reached the top 3 fast jets very low over the top of us.

The weather was being reasonably kind to us at this stage with the wind slightly from the side so not totally against us and we were still dry.

The first tea stop of the day was taken early as we had put in a fair shift so we stopped at the delightful tea room where the very friendly ladies told us the scones were just out of the oven, Paul couldn’t resist.  As I am watching my weight (and had already eaten a snickers bar LOL) just had tea.  As usual leaving the nice warm cosy tea room and getting out into the cold was a difficult mental challenge but by now we were on the home stretch so just pushed on.

The next 20 or so miles into Wick was uneventful except that I was feeling so good that on seeing a yellow jacket cyclist in the distance I suggested to Paul that we could easily catch him….. We did easily!

There was another tea stop in Wick mainly to borrow some electricity to charge Dave’s phone.  I have no phone and Pauls was about flat as well.  We had not had power to the van last night as we were obviously not on a campsite so were unable to get all the gadgets up and running.

With about 7 miles to go the wind started to try to push us back to England but by now nothing would have stopped us.  The run into John O Groats was windy and the temperature dropped quite significantly, it was not very warm to start with! The blackened burnt moorland looked particularly bleak.

Rob was stood at the roadside taking photos as arrived.  We then shook hands and had more pictures taken.  At this point I presented Dave with a H4H wrist band which I am sure you will all agree he deserved?

We loaded the bikes onto the van and it was now time for lunch so we opened a bottle of wine while Rob bought chips… We sat in what had been our home for two weeks and ate the Lobster which was delicious…. Quite a lot of mess though as we all smashed and cracked our way through them in a most uncivilised manner…. Fantastic.

We cleaned up then we were on our way to Aviemore where again we had some local hospitality with Paul and Dave’s Friend John allowing us to park in his drive.  Another visit to the pub then back to Johns to sample some very rare whiskeys, the perfect night cap!!! 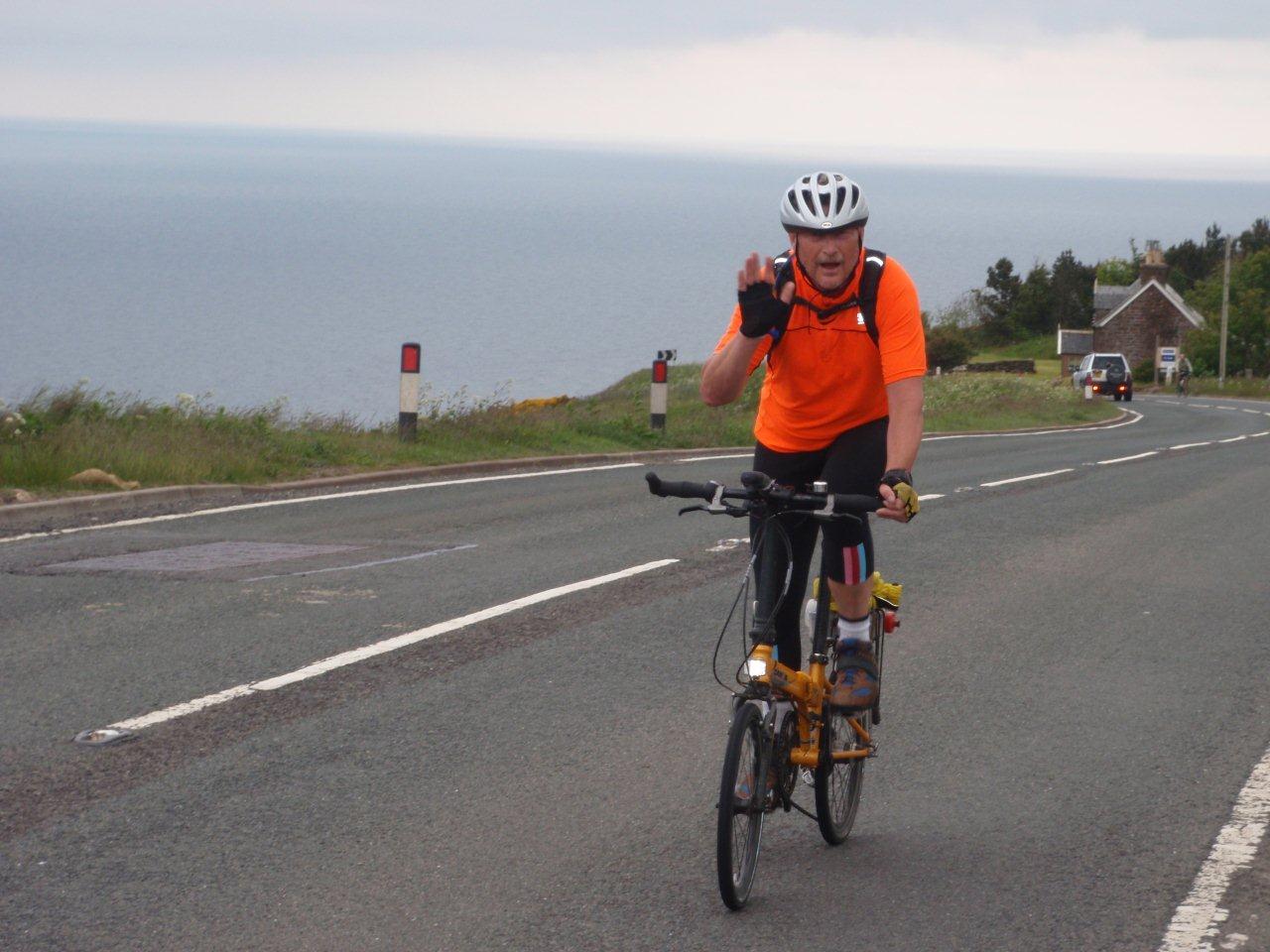 Arriving at the top of Berriedale Braes, Even had the energy for a wave! 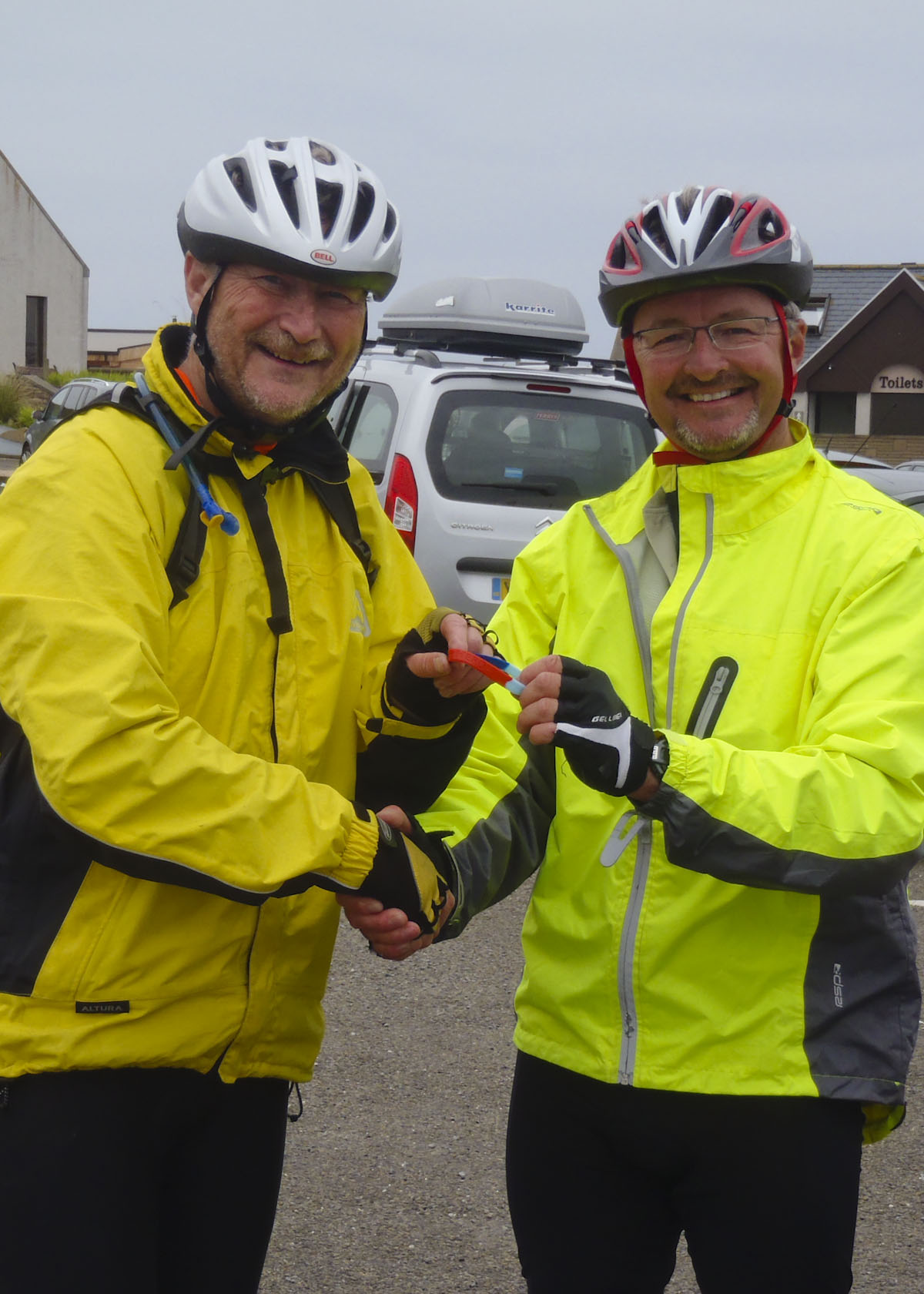 David being presented with his H4H wristband.. He's earned it! 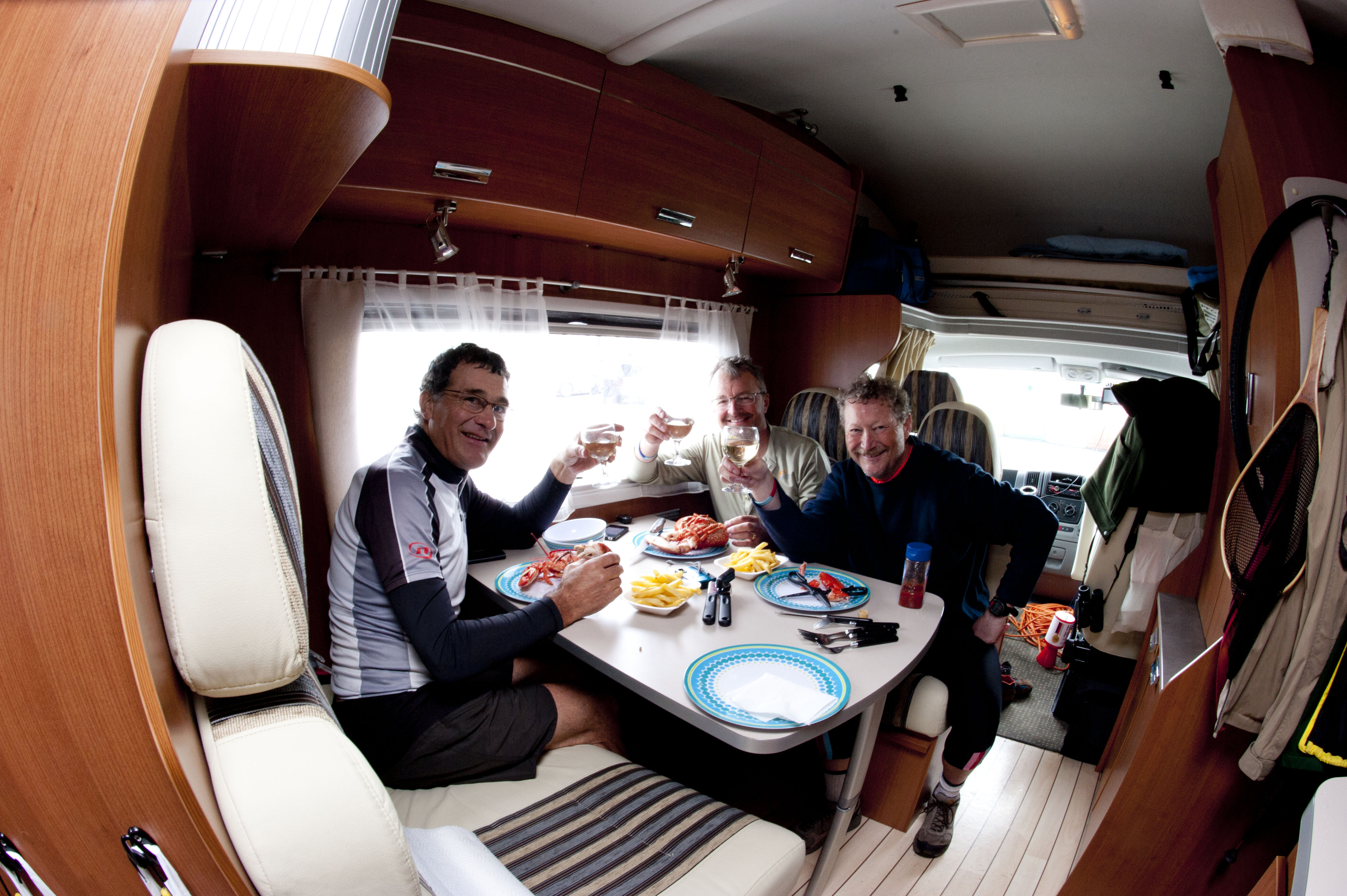 Roughing it.. Lobster for lunch Thank you so much Billy Cowie 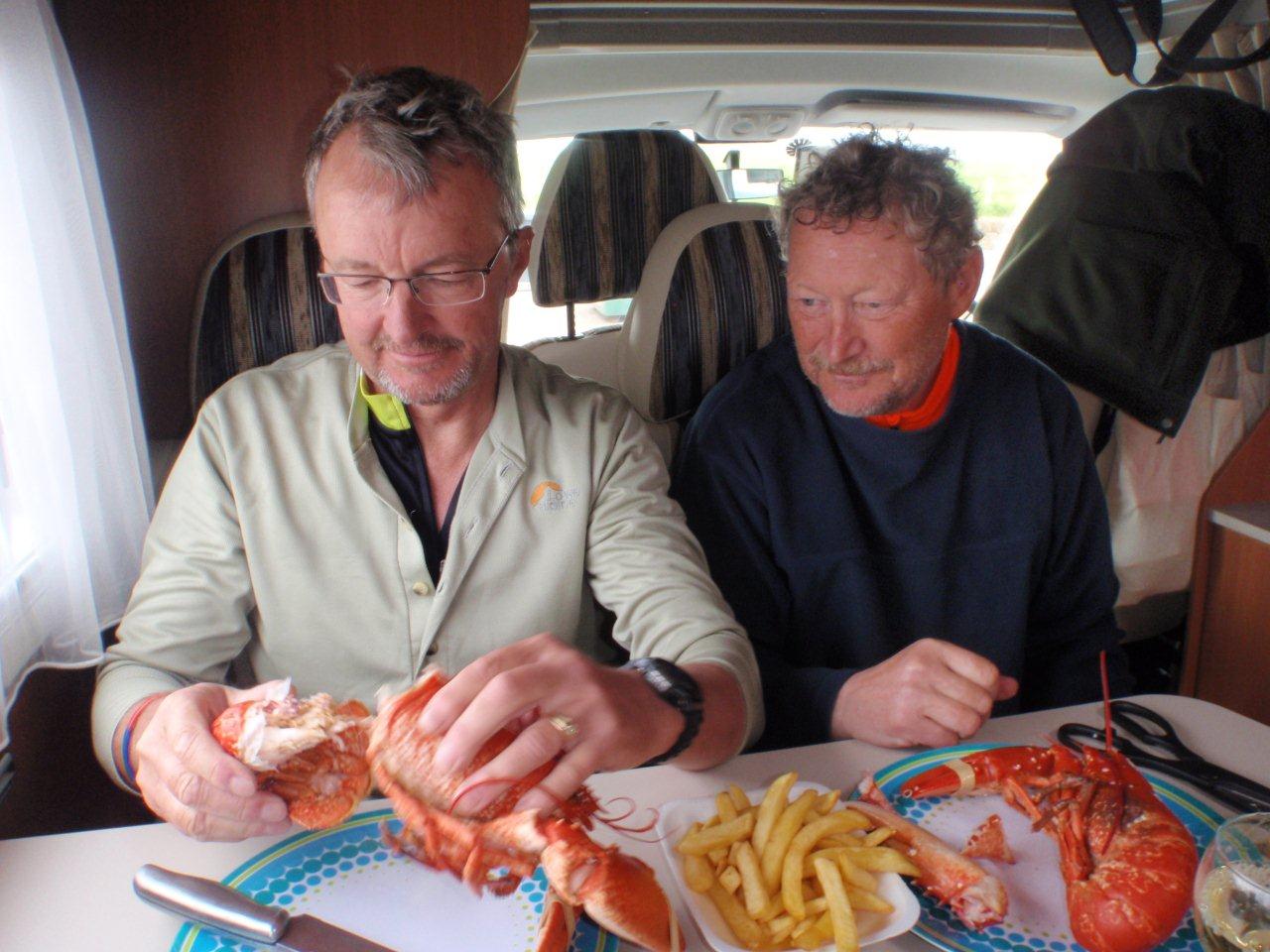 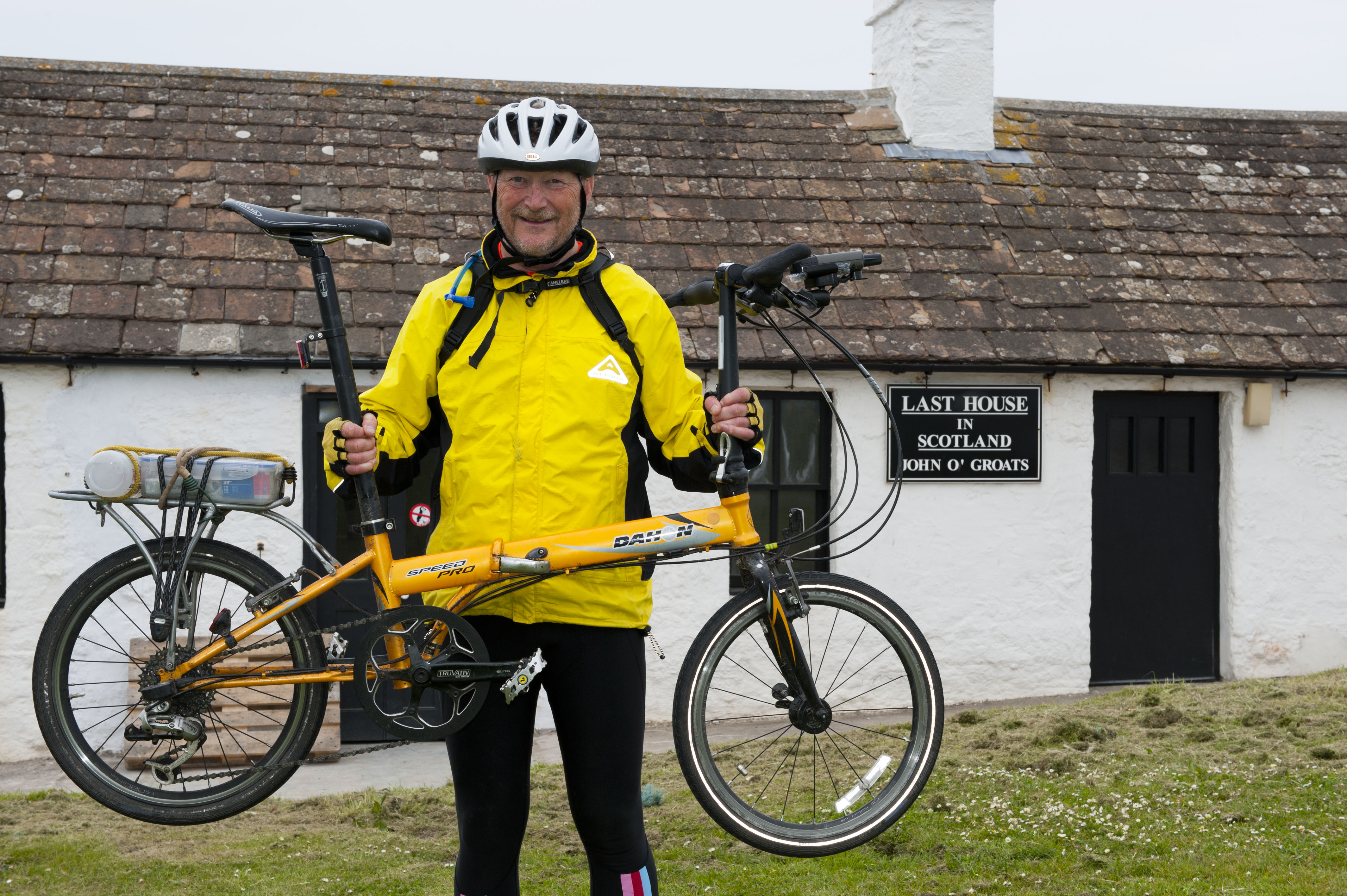 Not bad for a "Ladies shopping bicycle"