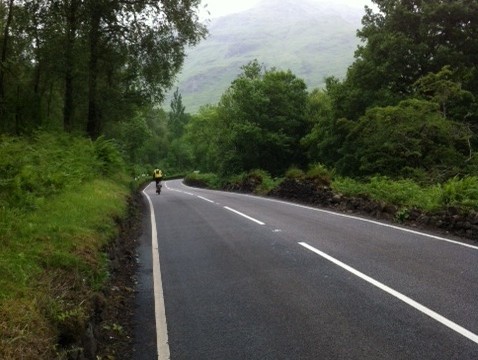 Just to finish Day 8, we had two cash donations one from the very nice lady driving our taxi and the other from the pub landlord; sorry I did not catch either of your names.

I slept quite well for a change but the constant drumming of rain still kept me awake longer than it should have. We were up early (as usual) and the damp grey conditions were having the same effect on us as they had yesterday, draining our enthusiasm. We ate breakfast which was back to the healthy Muesli and Yogurt plus a couple of hand warming cups of tea. Even getting all of our gear on was not fun as we have not had time to wash and dry clothes so it was nice clean cycling leggings and top plus very wet socks and even wetter shoes… So what it was going to keep raining anyway.

Rob was hovering around looking quite nervous as we showed no signs of digging the van out of the mud and we really wanted to get on the road as we were cold. Finally we put our minds to solving the van issue, not very easy as it was quite bogged down front near side wheel. Paul “found” part of someone’s fence which we wedged under the wheel along with some gravel and we started to push. After a bit of heaving, more gravel and some swearing the thing moved and Rob parked it smack bang in the middle of the road, SUCESS.  Waving cheerily thanking Rob for the alternative warm up we were on our way.

Paul being true to his word turned right out of the campsite and not left up a bloody great hill and we headed off towards Glasgow. It was cold and damp but nothing like yesterday and as we rode through Hamilton we admired the graffiti, shuttered shops and took in general ambiance. I did not know that the Salvation Army had so many high street outlets?

As the traffic was so light (not many people were about at 8 am Sunday morning )we decided that we could go through the city centre avoiding a few miles of a dreary bypass and rode along the side of the Clyde which looked more like mud than water. We stopped at the “Peoples Palace” where Dave noticed that the pipes were hot so while I bougth Coffee and Tea he had his shoes off and had them drying, great initiative!

Paul had arranged to meet his niece who brought essential supplies, clean pants for Paul (we are so close now I’m sure if I need them he will lend me a pair) and a new lock as we seem to have misplaced ours. A pleasant break surrounded by tropical plants in a large green house was all too soon over and we were on our way again. Just on the outskirts of Glasgow a minor miracle occurred and the sun came out. I hastily removed my once very bright yellow now muddy brown top and set off again. Traffic started to build and at one point we had a friendly exchange with a taxi driver… luckily for him I was in a much better mood than yesterday and all he got was a ”friendly gesture” , the reaction yesterday to the same outburst would probably been very different.

My poor little bike was squealing and squeaking from its rear as if in some pain so a stop at the garage and a spray of WD40 seemed to sort things out, If only my rear end was so easily sorted. Not sure that WD40 would be what my doctor would prescribe but with all the NHs cuts who knows?

Onto the next stop which was the bonnie bonnie banks of Loch Lomond, quite a tacky tourist trap actually but tea was hot and welcome. The route to the campsite followed the cycle path which we quickly abandoned and hit the road. I’m sure you have all had some very helpful chap call on you one day to offer to relay your drive as he has some “Tarmac leftover from another job” we always say no right? So what does he do with his spare Tarmac? Yes he dumps it alongside the road and calls it a cycle path… this one is so rough it is very hard to ride on, we were better off taking our chances with the traffic.

It had been quite a good day and markedly more pleasurable than yesterday but it surely couldn’t last…. right it couldn’t. With about 10 miles to go it started to pour down again so a quick stop to put the muddy jacket back on while trying not to be eaten by midges it was such joy.

On arrival at the van we were soaked and freezing but at least today it had only been for an hour. A quick cup of tea and some cake and then what’s all that biting… Rob rather well meaningly had left the windows open a little to “air the place out a bit” which had allowed the entire lakeside population of Midges into our temporary home. We rushed to the shower and then we were heading to the pub, yes I know you think that’s all we are doing but the most I have had to drink any evening has been 2 pints

One final note then dinner time… I never thought I would be so pleased to see a washing machine… clean dry clothes tomorrow…. pity the shoes are still so F*****g wet 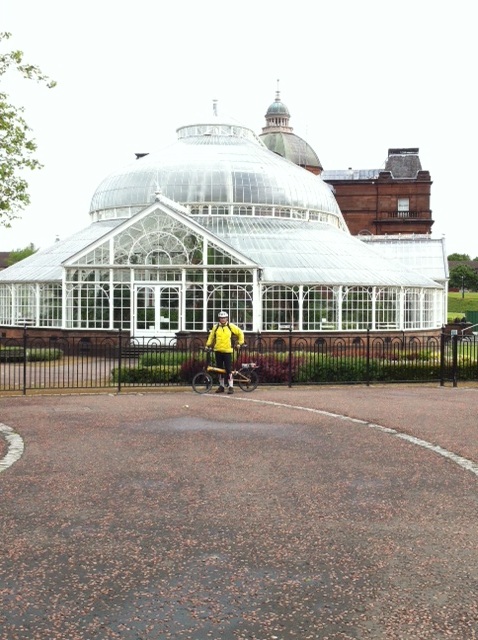 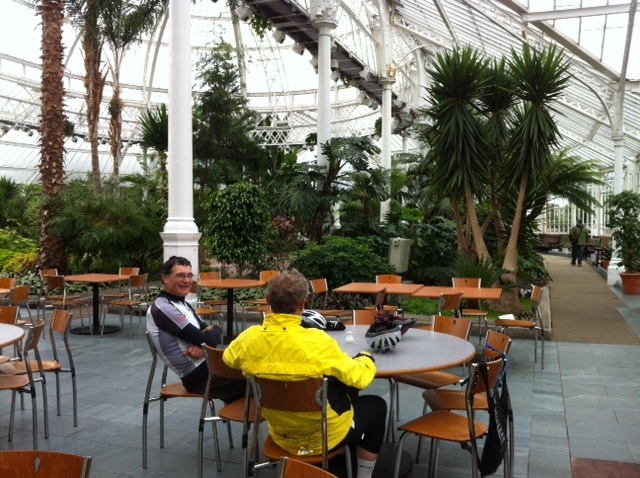 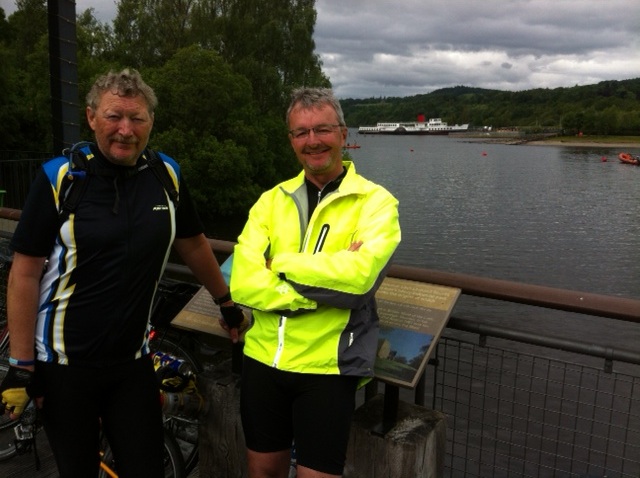