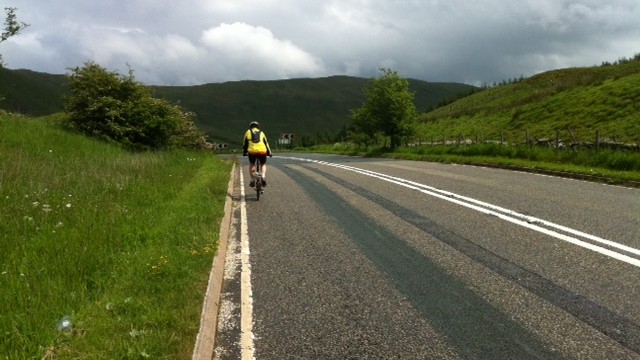 Just to Finish off Day six I had a surprise visit from my brother and his wife April, it wasn’t quite a “surprise surprise” because he had quite rightly gone to the campsite we had listed on my blog but due to height restrictions we were camped at another site.  It was only about a mile away though so not too much trouble.

The night was awful and I am sure that if there had not been 4 of us in the van it would have blown away, there was torrential rain and very strong gusts of wind and all of us confessed over breakfast that we thought we would have to call off the day’s ride, parts of me quite like the idea of not sitting on the saddle all day.  We had breakfast which in my case was cold sausages, Nan bread and Chilli sauce….. None of that healthy yogurt stuff today!

By the time we had finished our breakfast we could put it off no longer and actually it had stopped raining and the wind had dropped to force 8.

As usual we set of at a reasonable pace but I soon had to stop! Yesterday I was convinced I had lost a little weight off my backside and felt my saddle was a little low so I had raised it 0.5 cm (not a lot I am sure you will agree) well a mile down the road it felt like an awful lot and I was hurting bad… lowering the seat back to original height just meant I was hurting normally.

Phil  and Helen had texted to say that they would meet us on route and for once it all worked out we met briefly in a lay by then arranged to meet for coffee in Kendal where I was just popping into the bike shop AGAIN.  The front headset was making quite a scary noise whenever I hit a bump and the thought of the stem collapsing at 40 mph worried me a little.  I knew what the fix was but did not have a 10mm Allen Key with me so needed some assistance.  The fix took about 30 seconds so left the bike in Brucies Bike Shop Kendal and went to the cafe.  A nice cup of tea and we were on our way, or so we thought.  Before we had even ridden back onto the main road Paul had broken a spoke, a quick “U” turn and he was back in Brucies.

As Paul is much fitter than me he sportingly suggested that Dave and I just head off and he would catch us up.  We were heading up Shap so we were not expecting to be racing away.   Surprisingly (surprised me anyway) we got up and over Shap without even stopping, certainly no real temptation to even get off and walk.  Over the top we thrashed the bikes all the way into Shap village where we found a pub serving tea and decided to refuel…. Paul arrived while we locking up our bikes (B***ard).

Sitting quietly enjoying the tea the now very familiar noise of torrential rain and this time even some hail and thunder could be heard.  All the bar staff suggested that we were lucky to be inside as we were but as usual the comfort was over far too quickly and we were saddled up in the absolutely bitter cold driving rain.  Today we were really lucky as it only kept pouring at that rate until we got to Penrith.  Please note the poor attempt at sarcasm…

It was Paul’s day to have all the bad luck as he got a puncture so we were yet again in the bike shop!  Puncture fixed we were leaving only to be told by the mechanic that Paul had another broken spoke and others about to break.  Again we left Paul (all my sabotage the previous evening did seem to be slowing him down) and Dave and I headed off to the campsite without further mishap.   Just as we arrived it started to rain properly to ensure we did not have too much fun today (it still is pouring down two hours later).

On arrival at the camp there was a “gone fishing” sign on the van but Rob had shopped.  There was beer in the fridge and Tortilla chips with Salsa on the table, perfect.

A quick cup of tea which we had not even finished and Paul arrived just like us soaking wet and freezing cold.

Sat down with all the Hi Tech gadgetry to write the bolg and Rob turned up looking very wet and bedraggled but with a large beaming smile, he had managed to catch a magnificent wild brown trout of at least 2 lbs which he says is the best wild brown trout he has ever bought (sorry caught) in the UK.

All in all quite a busy day plenty of “bike shop” time but not much for the speed which I have to say baring any mechanical trouble should make the trip, providing I can power it! 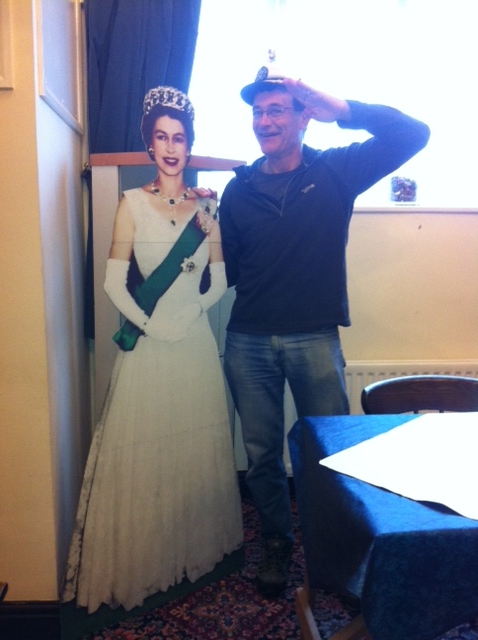