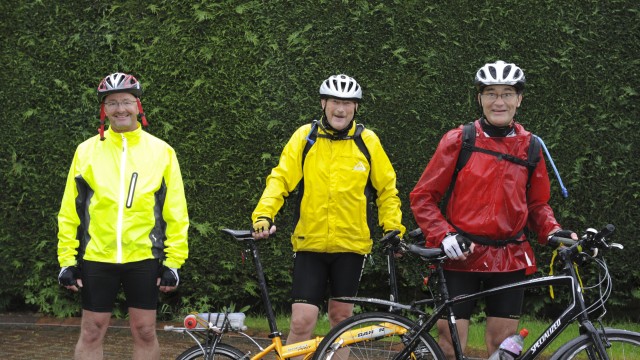 Sat in the van waiting for the bike shop to open so thought I had better do something…..

Slept badly again last night and was fully awake at 4 am but kept quiet as the boys have a long day today and hopefully I will be joining them later.  Today is the longest day with a trip of about 110 miles but Paul has assured us both that it is much less hilly than the first two days, on this occasion I believe him it could not possibly be that hilly three days in a row.

Feeling a little down as I write this as should be on the road and just sat here waiting.  Really hope they can rebuild rear wheel as still would like to do this on the folding bike, it reasonably comfortable and I have got with me all the “bits” I need for it.  If I do change bike will need to get a pump, extra tubes etc etc… It will be such a pisser after getting the other sorted… anyway nothing to do but sit doing nothing, will add to this later!!!

Well it is later and I have had a not bad day, arrived at “The Bike Shop” in Tiverton just before it opened and waited.    When I asked about the wheel I was told of course they could rebuild it BUT it would take some time…. Some time turned out to be about an hour and a half RESULT!  Thank you very much to Jay Cowley and Brandon Holdsworth for being so helpful, They also took off the stuck look pedal and gave my racer a once over, tidied up the cable ends and checked the gearing.  With both bikes ready to go we set off to try and catch up with Dave and Paul who had left at 7:30 with quite a stretch ahead of them about 110 miles in total.  We caught them up just before Frome where I unloaded the folder and got on my way.  I had said I would catch up with Dave and Paul in Frome where we would stop for lunch.  Paul jokingly (i think/hope) said I was not allowed to stop so I went through the town looking for them but somehow missed them.  I put my head down and pushed on hoping to catch them up soon.  When I got to Bradford on Avon I called Paul to see where he was and as usual on this trip so far the news was not so good…. He was fixing a puncture just the other side of Frome so we arranged to meet at the cafe where I was calling from.

I had quite a wait but the ladies at “Fat Fowl” in Bradford on Avon did not mind me sitting there dripping water all over the place and co incidentally their chosen charity is also H4H!  I only got the name of one of the 3 ladies so thanks a lot Maxine Maurissey and please pass on my thanks to the others.  If I have spelt your name wrong I do apologise but the piece of paper you wrote it on is VERY wet and the writing smudged, yes yet again the weather was a little inclement (I am becoming the master of the understatement).

The three of us were together after about an hour’s wait for me and we set off to Dave’s… he must have had three shredded wheat for breakfast or he could smell the home cooked dinner and his own bed because he set a very brisk pace into a very cold headwind and driving rain.  I honestly cannot remember being so wet and cold while on my “holidays enjoying myself”, even Dave’s pace could not get my body warm.   Thankfully there were no more incidents today and we arrived safe and sound.  Rob and Linda (Dave’s wife) had been very busy today… Linda had made us all dinner and Rob had managed to put quite a dent in the bottle of Whisky!

A very welcome hot shower was followed by dinner which was excellent. The couple of glasses of red wine obviously help us all to relax.

As the saying goes tomorrow is another day and let’s hope we get some respite from the rain and wind.  At least we will be starting in nice clean dry clothes as all that sort of domestic stuff has been done this evening….. Not sure Linda would approve of drying our very dirty smelly shoes in the oven though Dave? 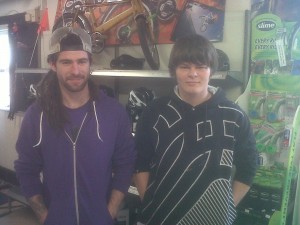 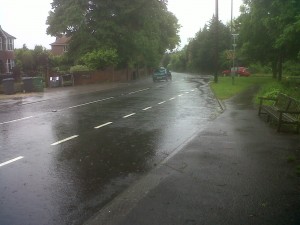