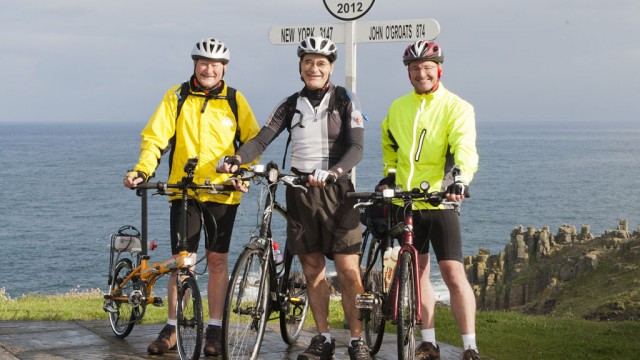 Met Paul and Rob at Waterloo and a very quick beer before the train left sadly Paul did not have time to have one! Arrived home just in time for the very large mobile motorhome delivered to my home and rest of the early part of Thursday evening spent being shown how to plug it in, empty toilets and other such joys…. Gave Barry a lift home then rushed home to get Rob and head off to sample the delights of Aldershot……. have to say the curry in the Nepalese restaurant was excellent!

Got home about 11 and decided I had better pack as we were leaving earlyish the next day.  Packing finished at about 2 am and actually only forgot a few important things, remembered the bike and padded shorts though so the essential were on board when we left.

Off as planned the next day but a slight delay as last minute omelette made with 10 eggs was cooked by Paul and devoured by the three of us.

Arrived at Junction 17 to collect David, his wife (Linda) suggested we must be mad as the weather was a little “inclement”, absolutely pouring down and the van almost being blown off the road at times.  Rob struggling to keep in a straight line as we were buffeted for side to side.  It took about 6 hours of hard driving to get us to the campsite.

We were assured that a short walk along the coastal track would take us to the Pub.  It was a “little” more than a short walk but we forced ourselves to do it so we could have dinner and another beer.  It had stopped raining by now but the wind was crashing the breakers into the beach, it was quite spectacular.  After the walk back which seemed much longer with beer and food inside us we arrived back to “our new home” and settled down for the night in preparation for a reasonably civilised start at 8 am.  Rob was awake at 5 am so we all were!

Drove down to LE from the campsite and arrived in torrential downpour which thoroughly soaked me while getting the bikes of the back of the van, it was so cold my hands were so wet and freezing I could not get my gloves on.  Rob took a couple of picture and we hung around waiting for our team of wellwishers to arrive but eventually decided as it had stopped raining and the wind had stopped we would get off.!

Full of “enthusiasm” we set off on the flat section from the Lands End hotel and within a mile or two it started to get a little hilly but it didn’t matter as we were on our way. The ride into Penzance the St Michaels mount was very pleasant and the weather was holding!

So far I have found this very difficult, much harder than I expected but Paul assures me it will get easier (he is a very creditable liar) .  Lessons learned , I need more to eat than 1 Banana for a day’s cycling in this terrain, folding bike very scary in the wet, Paul is MUCH fitter than me (to be honest I knew that already)